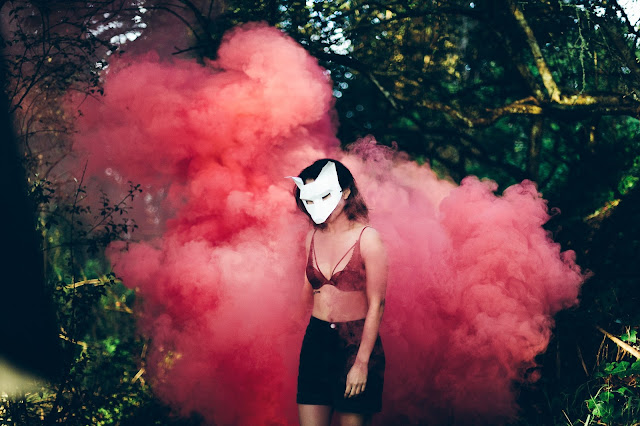 Ever had a dream where you just wake up going "What the heck was that?"


This dream is definitely one of those dreams. And I'm not the kind of person who has dreams like these very often. In fact, most of the time I don't have dreams. Or maybe I do but I don't remember them. Who knows really?

Now, I don't remember how my dream started out but there was this woman, who was selling nudes to this man who auctions it off or sells it? I don't know.....  But people ended up finding out about her and she ran away? At the same time, I was at this salon with the man who sells her nudes and I'm kind of trying to find out how he fits in all this. He got his hair done but the owner of the salon and one of my colleagues was there too. She also got her hair done. Why she was there? I have no idea but she seemed important but doesn't appear again later in my dream.

Somehow, during the whole thing, that lady who ran away was actually hanging out in the man's house. and she was being all depressed. There was a scene where he was trying to talk her down but she didn't listen and floated up into his bed (yes, floated) where she began to harden cause she was covered in a resin (I think this is cause I was watching some related videos on YouTube, don't ask).
Her 2 daughters were with her and so was her husband (the 10th doctor from Dr Who. Yes, really).

The man was suddenly in the streets below his apartment. I think he was there to look for help cause she was dying or dead? She was all hardened in resin in his bed after all.

Suddenly, I began to search his apartment with someone because I needed a change of clothes. I think I was covered in blood? Why? Who the heck knows right? Turns out the man usually purchases random clothing for women, children and from celebrities too. They're all organized well in his wardrobe. Like each type of clothing has their own specific drawer and everything was folded neatly. I remember distinctly struggling to get some clothes out of the drawers. Then, I kind of broke one of the drawers where he kept Marky Kate and Ashley Olson's old clothes. LOL
He's kinda creepy no?

Suddenly 2 men with shaved heads entered the room (think Saitama from One Punch Man). They were Japanese and somehow despite not knowing who they were in the dream, I realized that they were from a crime-fighting hero team? And the man was part of this team too??? They looked happy and I started to speak Japanese to them. One of them invited us to his place which was literally down the hallway form the man's place and was way smaller than his place too.

His room had a wardrobe with a mini display of what kind of clothes he had in his wardrobe. Kind of like those headless, armless and legless mannequins stores have to display their items. I guess he was making us part of the superhero team? Because I already had new clothes on. But looking at the display, I declined because I knew he wouldn't have any sizes for me. haha

We went to a cafe and sat at a table talking about superhero stuff I guess. Suddenly 2 women arrived. they were also Japanese and part of the superhero gang. One was trying to help me remember everybody's name but I don't remember them anymore.

One tall mother looking lady's superpower is to literally overpower you with grades. Yes, grades.
She has a report card with pre-determined grades on them. Depending on the grade of the subject, you would either get lovingly pat on the head or she would piledrive you into the ground.

The man who sold the nudes was a ninja samurai. And there was the other bald guy who I was messing around with. We were acting out funny situations like relatable situations where they faced difficulty being superheroes. And he ended up getting 2 black eyes because of me. 😂

I apologized like crazy but he was really nice. Then when I asked him what his superpower was, his whole face lit up into a random search homepage screen. Turns out he can't receive wifi from what there is around him but he can display what people have on their screen at that moment. He's kind of like an organic hacker. If that makes sense.

As we continued to talk and laugh, I suddenly woke up.

Yeah, it was a weird enough dream that I immediately wrote it down before I could forget anything else. This is definitely not the only weird dream I've had but all of them are long forgotten.