Fantastic Beasts and Where to Find Them | Movie Review 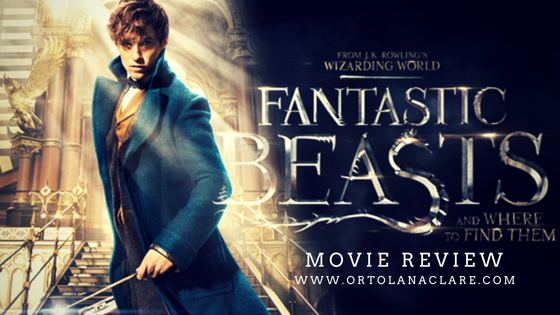 The Harry Potter fandom has risen again and this time it's a totally different ball game.
If you are unfamiliar with Fantastic Beasts and Where to Find Them, here is a little summary for you all in my words.

***Okay, I could have done better, but there's literally too many things to highlight in this movie.

It was a good movie. It had great humour and characters. However, I was not that blown away? I didn't walk away from this movie applauding as I left the cinema. It was a good movie, but I think the hype just ruined it for me.

That being said, it's still a cool movie that all Harry Potter and non-Harry Potter fans should go and watch. You totally don't need to have any knowledge about the previous movies so you can still enjoy yourself.

If you like comedy, cool mythical creatures, magic and attractive men/women then just go and watch the freakin' movie.


There are a lot of notable characters in the movie. Both human and non-human.

The first would definitely be the Niffler. He's an adorable platypus-looking creature that loves shiny things. He stuffs them into a pouch on his stomach. He causes SO MUCH trouble. I guarantee 90% of why you're laughing in this movie is because of this little guy.

Next, Newt's Bowtruckle. This guy rides in Newt's pocket and is super adorable too. He's like this needy girlfriend that can't stand to be apart from their boyfriend. At one point Newt is forced to give him up for information and he ends up shedding a tear. It was adorable.

Bless this cinnamon roll. If you are not of Tumblr then it basically means that this guy is too precious to even exist. He really loves his creatures and it shows. He's an interesting character with a lot of quirks. I do believe that Eddie Redmayne brought Newt's character to life.

This guy. This guy was great comic relief in the beginning of the movie. He kind of tapered off in the end but it was still really sad when they had to say goodbye to him. He's definitely a good guy with a big heart. No wonder Queenie likes him.

turns into this guy.

Yes. That is Johnny Depp with a really bad haircut and bleach job. I mean.... Why they decided to go with Johnny Depp as Grindelwald, I have no freakin' idea.

Here are a few people I think would make a better Grindelwald (no offense Mr. Depp):

Collin Farrell (yeah, he didn't have to freakin transform into Depp)
Mads Mikkelsen (As if he wasn't already amazing in Hannibal)
Ewan McGregor (yes, even this guy)

My philosophy is if you worry, you suffer twice
— Newt Scamander

I'm sure there's more. But this stood out to me the most.

There are 2 scenes that I absolutely love. The first one is with the Niffler as you can see below, and the Erumpent. I swear Newt's Niffler is stealing the spotlight. hahaha

Finally, here are some of Newt's creatures that you can find in the movie and their names.
My faves would definitely be the Bowtruckle, the Demiguise (he's so adorable with his handbag), and the Niffler.

Should you watch this movie?

By all means, yes. It's a good movie. If you're a die hard Harry Potter fan, it would definitely hit you in the feels real hard. As for me, would I go watch it again? Sure, if someone pays for my ticket. Other than that, I'll probably just wait for it to be available elsewhere.

And just because I left them out this entire post. Here are the amazing Goldstein sisters.
They're badass and I love them.

Watch Fantastic Beasts & Where to Find Them